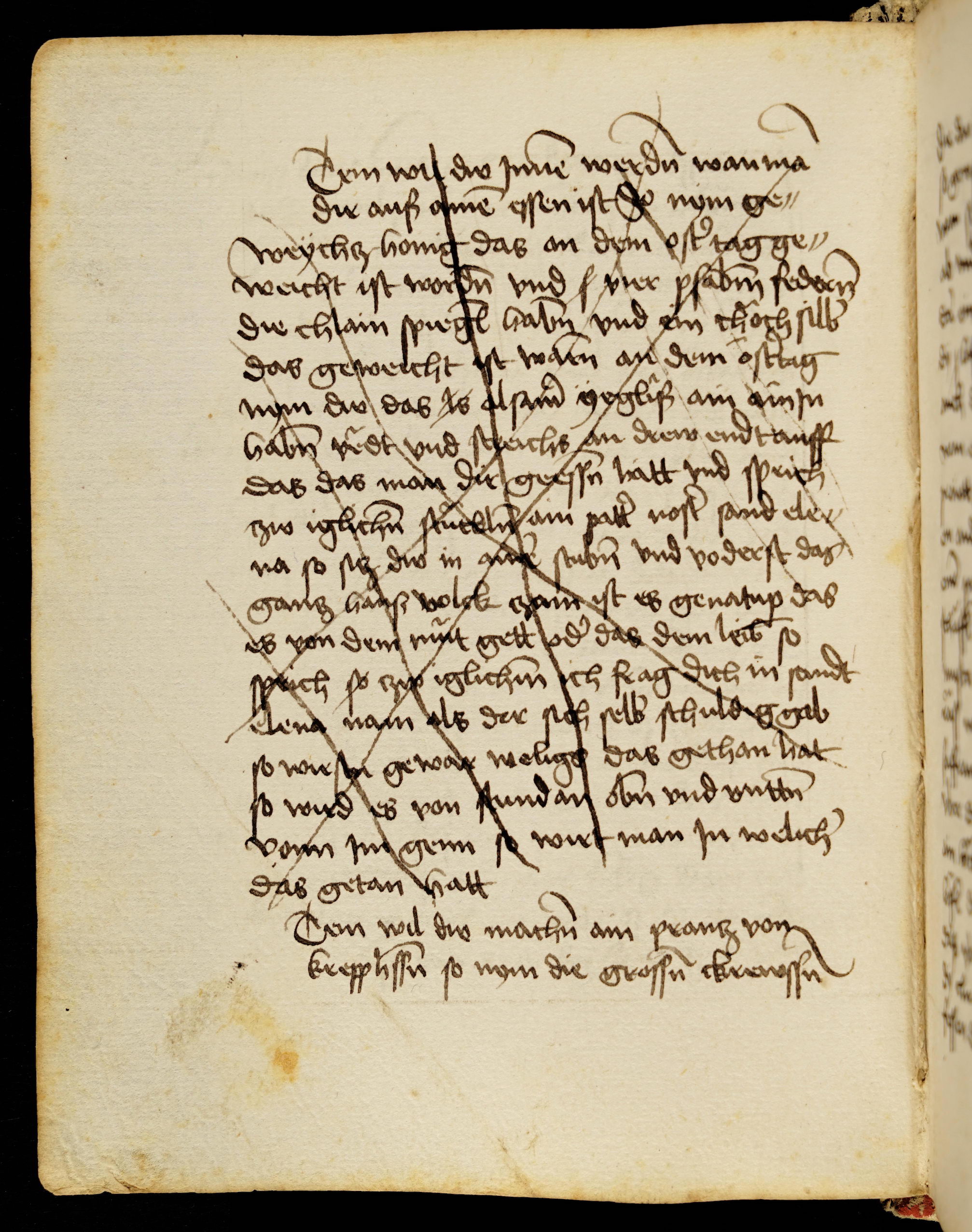 The digital edition of the German language cooking recipe collections aims at providing a hyperdiplomatic transcription of the source texts. This kind of research output is meant to provide our own and other disciplines with source texts further research can be built upon.

The central aim is to represent the historical source using only characters from the ASCII table.

The characters of the historical source not available in the ASCII table are described with the help of the TEI Character Declaration. In the XML of the sources they are modeled with the <g> element.

Abbreviations are modeled in the shortest possible way using the respective elements available: <abbr>, <ex>, <am>

Text revisions are modeled according to TEI P5 Guidelines using the standard elements.

Changes by the editors are modeled with the element <supplied>, the attribute @reason provides more detailed information:

The text of the source is represented as detailed as feasible.

Illegible characters are indicated by the element <unclear>. The element can span a width of more than one character.

Characters that have no representation in the MUFI are represented through visually similar characters to allow the generation of the diplomatic collation view. In some cases they may even be characters from a script (as described in the MUFI character recommendation) other than the late medieval bastarda of the cooking recipe collections.

We focus on a human readable TEI-XML, therefore high frequent special characters like tailed z, round z, single or two storey a are transcribed against above rules: the less frequent characters are annotated, the more frequent characters represented by the respective character of the ASCII code chart. These deviations are recorded in the <scriptDesc>.

The list of special characters is subdivided into alphabetic characters, diacritics, abbreviation signs, and punctuation. The hierarchic structure of the list is aligned to the model for script description of the DigiPal project:

In our model the element <char> annotates a 'character'. The element <glyph>, including the attributes @n, @ana, the 'allograph'.

The names of the characters meet the unicode standard:

The element <mapping> holds information on the possible representations of a <char> or <glyph>:

There are no detailed descriptions for characters and character combinations which are part of the ASCII code chart.

Letters of the alphabet

Long s and round s are differentiated.

Two forms of 'w' are differentiated.

Abbreviations are modelled throughout.

The hyperdiplomatic transcription can be downloaded as TEI-XML for the individual collections.

In the synoptic presentation the source text is slightly normalized:

Synopsis: This is a horizontal text / image synopsis where the transcription is aligned with the digital facsimile. This view can be used to simply scroll through the text.

Full-Width: This is a vertical text / image synopsis where the transcription is aligned with the digital facsimile. In this view the buttons of the image viewer have to be used to jump from one page to the next.

The macro structure of the source is represented: page and line breaks are displayed but column breaks are resolved into linear text according to the reading order.

Abbreviations are expanded. The expanded text is highlighted by italics and a different text color. A mouse-over function provides a detailed explanation.

Editorial reconstructions or insertions are indicated by square brackets. A mouse-over function provides a detailed explanation.